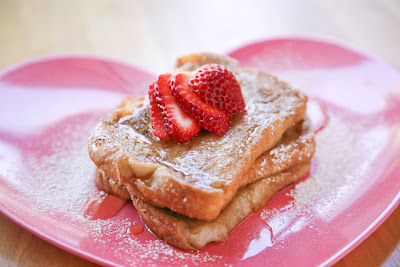 French toast! Something I am sure a lot of you thought you would never have again as a vegan. The trick to this recipe was the chickpea flour, which works well as an egg substitute. If you cannot find chickpea flour, you can make it yourself but grinding up small batches of raw chickpeas in a food processor.
I topped mine with some powdered sugar, strawberries and real maple syrup. A very healthy alternative to the traditional way French toast is made.
Printer Friendly Recipe Here
Ingredients
* 1 cup soy milk
* 1/4 cup chickpea flour
* 1/4 tsp cinnamon
* 1/4 tsp nutmeg
* 1/2 tsp vanilla extract
* Canola oil for the pan
* 6 slices of whole wheat bread
Directions
1. In a shallow bowl, whisk together the soy milk and flour. Once the flour is well incorporated, whisk in the cinnamon, nutmeg and vanilla until throughly combined. There will be a little lumps left in the batter. Don't worry about them too much, just make sure the bigger ones are dissolved. 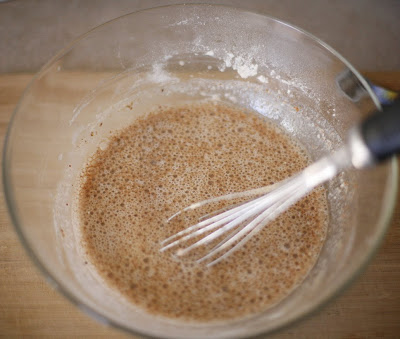 2. Heat a large skillet over medium heat and add enough oil to cover the bottom of the pan. The canola oil will be very important throughout this process. You will learn by trial and error what is too much or too little. Remember that the bread will absorb some of the oil so add a little extra in preparation for that.
3. Dredge each slice of bread in the soymilk mixture and add the hot oil. Cook the French toast until each slice is golden brown, approximate 2-3 minutes per side. 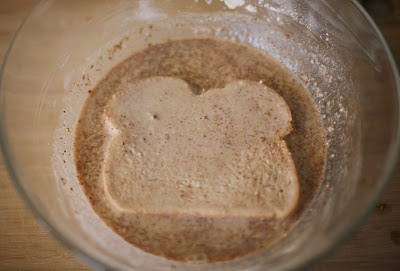 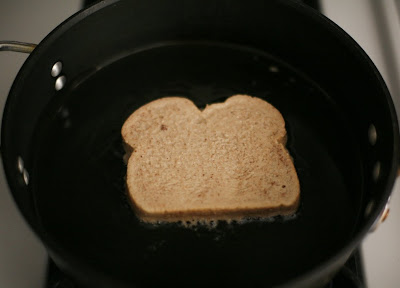